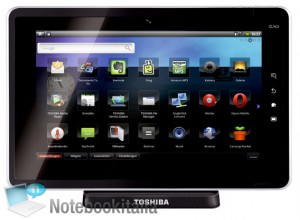 Until recently we knew only a few details about Toshiba’s Android powered tablet, which is possibly called the Folio 100, but now some more information has leaked out. For those of you who are not familiar with the Folio 100, the tablet is supposed to be Tegra-2 powered with a 10-inch touchscreen.

Now it is time for the new things – the rumors say that Folio 100 will most likely be powered by the Nvidia Tegra 250 CPU, a dual core Arm A9 processor running at 1GHz. The operating system most likely will be Android 2.2 and the resolution of the screen is supposed to be 1024 x 600 pixels. Among the rest hardware features are the 1.3MP webcam for video calls, 16GB internal storage, WiFi 802.11 b/g/n networks support, HDMI 1080p support, USB2.0 port, USB2.2 mini audio jack and last but not least – probably a 3G connectivity. This means you will be able to connect to Internet with a SIM card without using a 3G dongle and you could call your friends directly via the tablet. The battery is thought to be 1020mAh battery that will keep folio 100 up and running for around 7 hours.

If you want to be among the first to see Toshiba’s tablet and learn more about it – visit IFA conference, which begins on September 3rd in Berlin, Germany or keep an eye on our website for the latest news.