Froyo makes its way to everyone 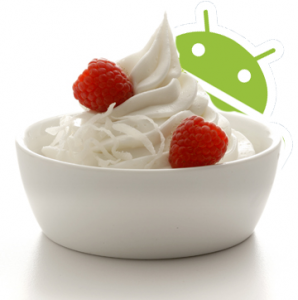 Since the rumors for release of Android 2.2 Froyo everyone has hoped that his device will be among those, who will be getting this update. But since then not many devices received it. But this week brings some good news to the owners of several devices.

Let’s begin with Dell Streak – since its release, Streak is running one Android 1.6. An exception are the devices, running on the leaked and modified build of the UK version’s .2.1 update, but they are not so much. But there are some news from Dell – they say that Dell Streak won’t be getting 2.1 but it will be directly receiving FroYo. The rumors were for December 31st but Dell promised that Over-the-air update will be released much sooner than this. So take a deep breath and wait for that yoghurt.

Motorola Milestone European customers may also be happy, because Motorola announced that they are starting to make some user tests. Once they are complete, it will be clear if some further optimizations and changes should be made and then proceed to the final testing and approval stage. Motorola promises to deliver Android 2.2 to European Milestone users by the end of the year.

Last but not least, it’s a good day for Samsung Galaxy S users. Samsung has just released the source code of Android 2.2 for this device. Practically this means 2 things – firstly that the official update is very close and secondly – that the guys from XDA developers and other custom ROMs developers will start working on this and soon there will be some nice custom ROMs for everyone keen on rooting and flashing.