Acer Liquid Metal on the market from November 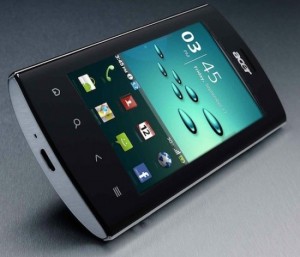 After numerous rumors and leaks around the web about the upcoming Acer’s Android powered handset Liquid Metal (it’s a pretty cool name, it’s a pity the hardware is not as cool). But now Acer have officially presented the phone, announcing that it will hit the market shelves in November for a price of 299 pounds in the UK.

The device itself has a 3.6-inch (a bit unusual size) capacitive touchscreen, an 800MHz Qualcomm MSM7230 processor, support for WiFi 802.11 b/g/n networks, a 5MP camera with autofocus and LED flash, capable of recording a 720p HD video. The user interface on top of Android is Breeze UI. It offers applications like SocialJogger, which combines your Facebook and Twitter profiles together, which has become something common nowadays. A good thing for music lovers is that you have the ability to play your songs with EQ profiles and Dynamic Bass Boost.

An interesting thing is that the Applications’ drawer and notification bar are combined into one item at the bottom part of the screen. An interesting solution, making us wonder how the notifications would be handled, but let’s hope that soon there will be hands-on video from Acer.