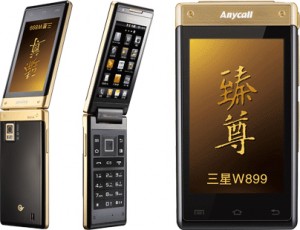 We’ve seen many Android smartphones with different hardware specifications – processors, display kind and/or size, RAM, ROM, hardware keyboard and so on. But all the phones have one and the same form factors – either a chocolate bar or a slider with hardware keyboard underneath. The Korean manufacturer Samsung has decided to break the ice and bring us back in time when the clamshell factor was trendy, introducing their newest Android device – W899, targeted at the Asian market.

W899 has a stylish rectangular form, similar to an ordinary chocolate bar and at first glance you will think that this is the form factor of the handset – but you are wrong. The most interesting and never seen before thing in W899 is that it has two 3.3-inch Super AMOLED touchscreen displays. One of them is positioned like the ordinary display of a clam-shell handset and the second one is placed on the back side of the lid. So you will have a display at your disposal when the phone is opened and when it is closed. It’s an interesting concept but whether it will be success or not – the sells will show. The rest features of W899 include multitouch support, Android 2.2 FroYo OS, 5MP rear camera and a VGA front-facing one for video calling, 1GHz processor, Wi-Fi, GPS, Bluetooth and only 512MB internal memory.

It’s not clear yet if Samsung will release W899 to the rest of the world, but if they do, it will surely be part of the Galaxy family. As for the Asian market – still no info about price and availability.