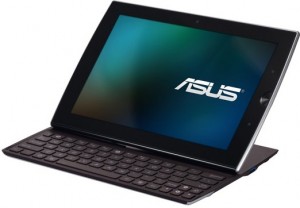 Can we really see the ASUS Eee Slider in September? The slider was revealed back in January at CES, but those were only rumors. A new page of products showed the specs of ASUS slider and hinted its launch in September in Italy.
They have revealed the prices for 16 GB and 32 GB slider; the price for 16 GB Eee pad is $400 and for 32 GB is $550. The Slider has a massive screen at 10.1 inches. The device is loaded with NVIDIA Tegra 2 dual core 1 GHz processor and a total of 1 GB RAM. It has a front camera 1.2 Mega pixels for video calling and a rear 5 mega pixe camera. It supports USB 2.0 and has a mini-HDMI along with micro SD card reader, Wi-Fi and Bluetooth.
The device will be launched first with Android 3.1 Honeycomb but it will later be upgraded to the latest version of Android 3.2. This is a little disappointing as the ASUS Transformer tablet already has the upgrade, the device is said to launch in September so there maybe enough time for ASUS to pack the Eee Slider pad with the update.
Update: We have heard that ASUS will release an update in the first week of its launch.