Today there is plenty of news coming from the famous audio-oriented manufacturer Creative. We all know their sound cards for computers, portable media players and headphones. But today they have surprised us, presenting two new devices – one is an Android powered PMP (looks like Philips is not the only one who will launch such device) and … Android powered series of tablets, called Ziio.

But let’s begin with the portable media player, called Zen Touch 2. The first noticeable think when one looks at its computer generated pictures is that the icons on the buttons are facing left, suggesting that the device is intended to be used in landscape mode. As for the rest of the hardware, Zen Touch 2 hides in itself 3.2-inch screen, Bluetooth 2.1 support, 802.11 b/g/n (nice to see a support of “n” networks), 2MP camera (not much but.. hey guys, this is media player, not a camera), GPS, FM radio and all of this powered by Android 2.1. Sounds pretty good? Yeah, until you see that it will have a resistive touchscreen display. The player is expected to be released soon in 2 versions – one with 8GB memory and one with 16GB with prices starting from 279$. 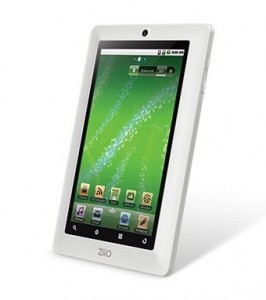 Talking about the upcoming Ziio tablets, there will be 2 devices – one 7 and one 10 inch. Both will be running Android 2.1 (it seems that Creative are not keen on FroYo J ) and will be available in different memory configurations. They will also have a front facing camera on board, built in microphone, an accelerometer, microSD card slot, GPS, FM radio and a composite video-out connection. I guess that you expect some fancy audio equipment on board and sound optimizations and you are right – Creative will be using their X factor – named X-Fi Crystalizer which restores the lost data from CD ripping, and X-Fi Expand. Again a drawback is the resistive touchscreen, but the custom UI of Creative makes the navigation a bit easier. Both devices will be available from December for 199.99 pounds for the 7-inch, 8GB going up to 369.99 pounds for the 10-inch 16GB model.