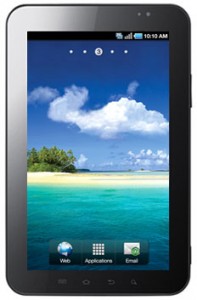 Since the rumors for the upcoming Android tablet of Samsung showed up around the web, Galaxy Tab is constantly in the daily news of almost every mobile-oriented media. Starting with the specs, going through the official announcement, ending with release dates and prices in various countries and carriers.

The first thing that we are going to inform you today is regarding the price of Galaxy Tab. Today is the launch day of the Tab in Sprint’s network. It will cost 399$ on a 2-year contract. The possible data plans are 29.99$ per month for 2GB of data or 59.99$ per month for 5GB of data and unlimited messaging. So to sum up, if you go on a 2GB plan, you’ll have to pay about 720$ for the contract and additional 399$ for the Galaxy Tab itself. Choosing the 5GB plan will cost you about 1440$ for the contract. And all these numbers does not included taxes and surcharges.

The second this that is interesting around Galaxy Tab is that Samsung has released the open source parts of the source code of the tablet. To most of you this wouldn’t mean anything, but for the developers these are very good news (actually soon the users will benefit from this, too). Of course, many of Samsung’s applications are not open source, but developers could use this source to build various ROMs, kernels and so on. So stay tuned and wait for the first custom ROMs for your Tab.