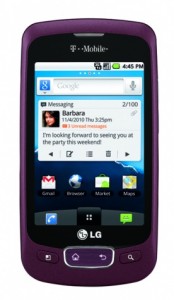 These days T-Mobile has announced that they will enable Wi-Fi calling on their Android devices, particularly mentioning the upcoming new myTouch and Motorola Defy. Until now this feature was present only on the rest of T-Mobile’s phones and Blackberry, but now Android users will take advantage of it too. This will help users saving their free minutes and on the other hand it is very useful for areas with low or no cell coverage at all, but you have internet access.  I think that everyone  would like such a feature on his mobile phone, because most of us have wireless internet connection in their home and could make free calls using it. Let’s hope that more carriers will follow T-Mobile, because until now it is the only one who offers such services.

The other news from T-Mobile is about a new mobile phone in their lines – LG Optimus T. The device is aimed at the first-time smart phone buyers. It will be running on Android 2.2 with full integration with all Google features, including Google search, maps, voice actions, talk, gmail, calendar and so on. Optimus T features a 3.2-inch touchscreen display running at 320x480px resolution, 3.2Mp camera, microSD memory card slot (with 2GB one in the package), Wi-Fi (Unfortunately no WiFi calling), Bluetooth, GPS and a 1500mAh battery.  The devices is expected to be exclusively available for T-Mobile customers this holiday season. Yet, no information about the price.