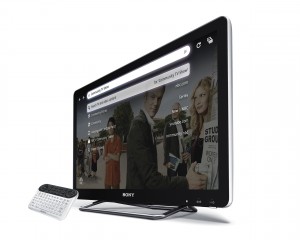 The wait is over and the first Google TV was finally announced by Sony, presenting their 46-inch GT1 Sony Internet TV. This is the first TV ever in the world, that is capable of playing HDTV, install and run applications on it and browse the web, thus making it not just a TV but something between a TV and a computer. The device will be selling for a price of 1399$, which is about 500$ cheaper than it was initially reported.

An interesting addition is the RF QWERTY keypad remote with integrated optical mouse. It’s like a small computer keyboard, mouse and a remote control all in one, making the browsing in internet and Android market much easier. All the four TVs will be available in the Sony Style store this weekend and they are expected to show up at Best Buy stores starting from October 24.