This week’s  Appy Monday installment is long overdue! But this week I have a game for you that is the one of the weirdest I’ve ever come across!

Mr. Legs is an amazingly quirky unique and to say the least strange android game. The object of the game is simple, collect the cherries as Mr. Legs is as the developers say “is the best CHERRY picker in all of the Deserts Of Londonium”. By swiping your finger up and down the screen you extend or reduce Mr. Legs legs allowing him to gobble up the cherries while also avoiding the dangerous bombs and birds that can attack Mr. Legs. 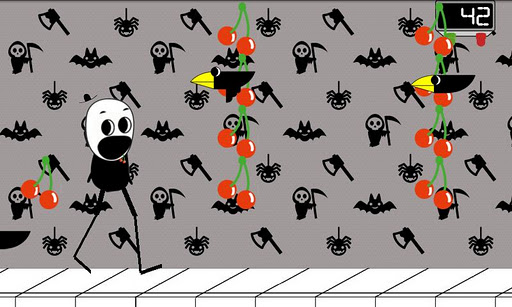 Like all great games the plot is simple and Mr. Legs is no different, where it is different is its style. It’s not too often games of this caliber come along, its styled in a black and white 1920’s style animation that in it’s self is odd. Throw in some off the wall music and the wacky sound effect and you a very very odd ball that is brilliant! You can download Mr. Legs on Google Play for a €0.99. It’s only a euro, you cant even buy a burger for a euro these days!