Droid Pro gets official by Verizon 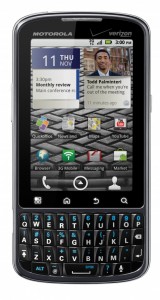 Verizon has officially announced a new device in their lineup – Motorola Droid Pro. This happened during a private event organized by Motorola and Verizon during the CTIA Enterprise and Apps in San Francisco. We have heard about this phone, but nothing has leaked out – no specs, no photos, so everyone had taken a deep breath, waiting for Motorola to surprise us. And they did it!

The first thing that one should know about Droid Pro is that it features a full QWERTY keyboard. But no, it is not another Charm-like handy. Technically, the device has a lot to offer. In the heart of Droid Pro stays a 1GHz Omap 3620 processor, controlled by Android 2.2 OS. Other specs that need mentioning are the 3.1-inch capacitive touchscreen display, 5MP camera with auto focus and dual LED flash, 2GB ROM and 512 RAM, support for WiFi 802.11 /b/g/n networks, global roaming capability, 3G Mobile Hotspot support and last but not least – DLNA support. On top of all this, there will be a reduced version of Motoblur.

All these features sound pretty cool and it’s almost certain that Droid Pro will be among the top of the hi-end Android mobiles. All that’s left is to wait for the official release and the price of this nice gem.

1 thought on “Droid Pro gets official by Verizon”