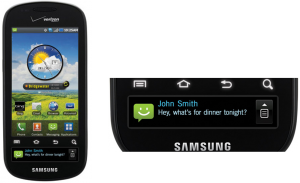 Seeing Android on a various number of devices – handsets, media players, netbooks, tablets or being combined with another OS with options for dual-boot has become something common, but we’ve never seen  Android on a dual-screen device … until now. Samsung has finally confirmed the release of the long rumored dual-screen Android handset – Samsung Continuum.

Samsung has presented the Continuum as the “first phone with a dedicated ticker display” having in mind the 1.8-inch Super AMOLED color display at the bottom of the mobile phone, just below the touch-sensitive buttons. But this is only the secondary display, the device has a primary 3.4-inch Super AMOLED display. There will be a “grip sensor” which will constantly check if you touch at the bottom sides of the phone. If you do so, the sensor will light up the ticker display section.

In order to make it possible for the developers to take advantage of this ticker display, Samsung will provide an API which can be used for that, but until then, only the native Samsung applications will be able to use the small display. Yet, no additional information and specifications are known, but keep reading our site for more information on the subject.

1 thought on “Dual-screen handset from Samsung”