Google recently released details relating to its latest Nexus smartphone. The Nexus 4, which is manufactured by LG, boasts a host of impressive specifications that will leave most Android users chomping at the bit. 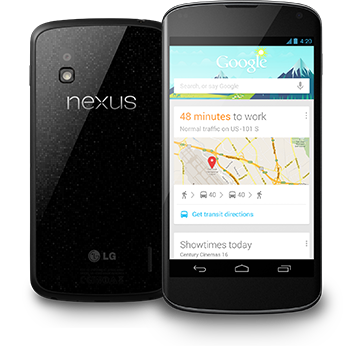 While the phone hardware is top drawer, the same cannot be said of the price which is basement bargain. The phone is currently on sale in the U.S. for just $299 USD, unlocked and with no commitment required to a mobile carrier. This will allow folks to purchase a top end phone at a knock down price without the pain of a 12-18 month contract! Happy days I hear you scream!

So where is the downside? The only major downside that has been noted to date is the phones lack of support for LTE networks, and this may not bother most people due to its impressive download rates via HSPA+. That said, according to theverge  the phone can be forced to use an LTE network, for users in Canada, through some light tweaking.

Regardless, this is an impressive new offering in the Google range and one that we here in Android Mobiles cannot wait to get our grubby little fingers on!