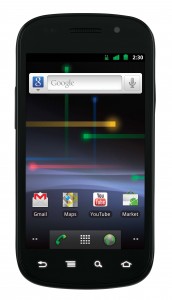 During the last several months there were numerous rumors, leaked pictures, speculations about the manufacturer and the specifications of the new Google phone – Nexus S. Yesterday during the presentation of Android 2.3 Gingerbread, Google showed and made official their new handset as well – Nexus S, manufactured by Samsung. The choice of the manufacturer is not a surprise taking into account the big success of Samsung Galaxy handset family and the Samsung Galaxy Tab.

Working together, Google and Samsung has managed to create the best Android smartphone on the market so far, being the only one running the latest version of Android – 2.3 a.k.a. Gingerbread. The shape of the device is nice and sleek with curved edges and unique slightly curved display for best user experience. At the bottom part of Nexus S one could find the common Android key, this time in the form of touch-sensitive buttons – Home, Menu, Back and Search. Behind the cover you could find a 1GHz processor, 4-inch WVGA Super AMOLED display, connectivity for GSM/EDGE networks, gyroscope sensor for gaming, a 5MP back camera and a VGA front-facing one both with autofocus, Bluetooth and Wi-Fi support, 16GB internal memory and a 1500mAh battery. The device also is the first one to feature a NFC (Near Field Communications) chip that will enable you to pay bills and other upcoming features via your mobile phone.

The device comes preloaded with all the Google services like Gmail, Google Calendar, Google Maps, Google Search, Voice Actions, Google Voice and the YouTube application. Google Nexus S will be available for purchase in online stores and on the shelves starting from December 16, but the price is yet unknown.