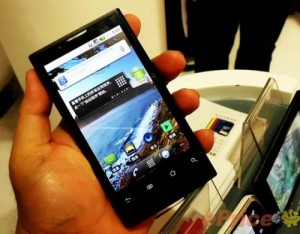 The first of the two – Ideos X6 looks very similar to Motorola Droid X. It features a large 4.1-inch WVGA display running at resolution of 800x480px, made by Toshiba, a 1GHz Snapdragon processor, 2GB ROM, 512MB RAM, HSPA+ data connectivity, a HDMI output, 5MP camera capable of recording 720p HD video and last but not least – the usual sensors and connectivity hardware like WiFi, GPS, FM radio and orientation sensors. All this will be under the control of Android 2.2 FroYo OS.

The other device – Ideos X5 is targeted in the middle class handsets. It is also running Android 2.2 and has HSPA+ connectivity,  5MP camera, and all the sensors and connectivity abilities. A difference between X5 and X6 is that X5 has a bit smaller display – 3.8 inches, but it is still quite big, having in mind that HTC Desire has a 3.7-inch one.

Both devices will run the stock version of Android, without any makeover with skins like Motoblur or HTC Sense. The handsets are expected to show on the shelves in the first quarter of the next year in Hong Kong, but still no word if they will be available to the rest of the world.