LG presents Optimus One and Chic 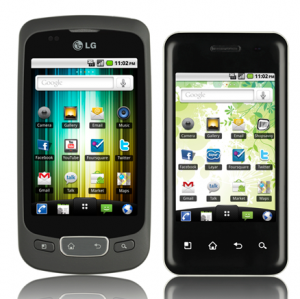 The mysterious online event to which many tech blogs and websites were invited took place yesterday. It was broadcasted online and everyone was able to “attend” it. There were rumors that LG will present a new Tablet but this didn’t happen. During the event LG announced 2 new Android devices – Optimus One and Optimus Chic.

One of the good things about these 2 mobile phones is that they will be running Android 2.2. Taking a look at the technical specifications one would be a little surprised, because the name Chic leaves an impression that the phone will be nice and shiny but with low hardware abilities. That’s not the case here – both devices have almost equal specifications – 600MHz processor, 3.2-inch capacitive touchscreen displays, Android 2.2 and small internal storage. LG Optimus One has 170MB storage, 3MP camera, 802.11 b/g WiFi adapter, Bluetooth 2.1 +EDR, FM radio, A-GPS and 1500 mAh battery.

On the other hand LG Optimus Chic features a 150MB internal memory – a little less than One, but it has a 5MP camera. Another difference is that Optimus Chic has a 1250 mAh battery. But let’s not forget that Chic is more into the design – nice and sleek with touch-sensitive buttons at the bottom. It also supports LG Air Sync – synchronize your contacts, messages, images and everything else wirelessly and also features DLNA which enables you to share multimedia over TVs and notebooks.

Pricing is not announced, but LG said to release Optimus One in 120 different wireless providers in more than 90 countries, starting in October, while Optimus chic will hit European markets in November, followed by Asia-Pacific shortly after.