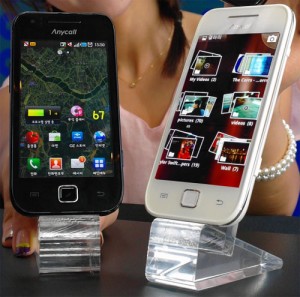 Last week there were rumors and speculations regarding the specifications of Samsung Galaxy U mobile phone – the Asian brother of Galaxy S. But on 20th August 2010 Samsung has officially presented the mobile device for the South Korean mobile provider LG U+, confirming the rumored specifications.  The most noticeable difference at first glance between Galaxy U and Galaxy S is the display’s size – Galaxy U features a 3.7-inch touchscreen display while the other Galaxy member has a 4-inch screen, both having  16M colors, 480×800 pixels resolution, manufactured using the Super AMOLED technology.

Taking a further look on the Galaxy U, you can see another interesting difference – the internal storage is 8GB against 2GB for “S”. Other features that need mentioning are the microSD slot for memory cards up to 32GB (8GB card included in the package), Wi-Fi supporting b/g/n networks, 5MP camera capable of recording 720p HD video,  1GHz processor and T-DMB TV tuner, which has become something common for hi-end mobile phones for the Asian market.