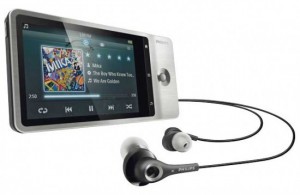 The Android mania has obsessed everyone thus many manufacturers try to think of different devices that can take advantage of Google’s mobile OS. After the mobile phones, the Android-powered tablets emerged with many new models from Samsung, Asus and Toshiba expected to hit the markets till the end of 2010. But Philips comes with an interesting solution. Their new PMP GoGear Coonect runs on Android 2.1 and is already available for pre-order from Argos online store.

Being available for pre-order is good news – this means that the final specifications and the prices are clear. Currently only the 16GB model is available for 264.99€. The specifications are quite impressive taking in mind that this is just a PMP. The most noticeable part is the 3.2-inch touchscreen display with 16M colors and resolution of 320x480px. GoGear’s internal storage varies from 8GB to 64GB, there are also FM radio, GPS, microSD card slot, USB2.0 port and last but not least – a camera.

Philips have also developed their own UI which, as it is expected, is media playback orientated. The player supports up to 25 hours audio and 5 hours video playback. Another interesting thing is that according to the specifications on Argos’s website, the player will have access to the Android Market.