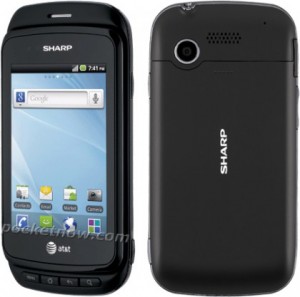 Sharp isn’t really the name associated with the mobile world especially when we talk about Android. However it looks like AT&T and Sharp are joining up to bring a new phone, the Sharp FX II Plus to martket and it isn’t so bad for the first timers. The image leaked about 2 months ago revealing the physical appearance of FX II plus.

The Sharp FX II features a full QWERTY keyboard which opens with a slide. It has a 3.2” screen with Froyo pre installed no doubts this will be upgradeable to Gingerbread in future. Sharp has promised that FX II plus is loaded with a 600 MHz processor, HVGA resolution and 512 Mb of RAM. The device features 3.0 mega pixel camera with Flash and we have also heard of 7.2 Mb HDSPA.

We have seen alot of the Android phones with high end hardware and advanced capabilities and majority of them are not what you might call affordable for everyone. Normally Android phones are loaded with 1GHz processor and minimum of 5 mega pixel HD camera. But if anyone out there is looking for a low featured android phone, here is a phone that might check a few boxes. One of the prominent features of this phone is its noise cancellation technology. With Sharp FX 2 you can get access to thousands of android applications free.

The phone however is not as powerful as other Android phones are and has a few less features and accessories, but still it’s a good choice for those who love to go simple and are keen to operate Android in low price ranges.