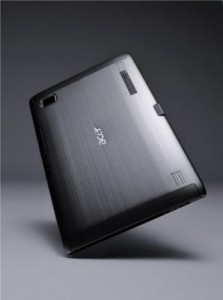 It seems that the famous notebook (and recently handset) manufacturer has decided to step into the Android device market, introducing two new tablets – a 10-inch one and a 7-inch, together with a mobile phone/tablet, having a 4.8-inch display.

But let’s first begin with the big boy – a 10-inch tablet that is expected to be released in April, featuring “full Android tablet experience” whatever it means. But we all hope that Acer will integrate Android 2.3 Gingerbread into it. The tablet will have a 1GHz dual core processor, 1280×800 pixels resolution, Flash 10.1 support (so at least Android 2.2 installed), HDMI output and a 4MP camera. The body is just 13.3mm thick and is made of aluminum. Sounds pretty good and if combined with a pleasant price, this tablet will definitely be the favorite toy for many people.

But what if you are not into those big 10-inch tablets and would like something smaller, that you can put into your bigger pocket or in your ladies handbag? Acer have prepared something for you, too. They will release a 7-inch tablet as well, expected to hit the markets again in April. It will have again a double-core Qualcomm processor, but this time running at 1.2GHz frequency, Flash 10.1 support, resolution of 1280×800 pixels again (pretty nice resolution for a 7-incher), Wi-Fi and 3G connectivity (let’s hope it won’t be locked to certain carriers), 5MP rear camera and “HD” front-facing one for video calls and last but not least – DLNA support. It is supposed that the 7-incher will be running on Android 2.2 FroYo.