Dell Streak with competitor by Acer 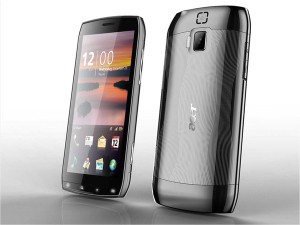 For quite some time Dell Streak was the only serious and attractive device in the middle segment between the mobile phones and internet tablets. Acer has just announced their new Android based … device. It is expected to be available in April 2011 and will have a 4.8-inch display, running at 1024×480 pixels resolution. An interesting thing is that the device still doesn’t have model name.

But the screen is not the only impressive thing in that sweet “little” boy. It hides many good things inside – 1GHz Snapdragon processor (it could have been a double core as in the newly announced tablets, but it’s still good), HSDPA support, Wi-Fi 802.11 b/g/n networks support, Bluetooth 3.0, HDMI output, 8MP back camera with LED flash, capable of recording 720p video (it could have been 1080p as it is rumored for the rest upcoming handsets for 2011), a whole 2MP front facing camera for video calls, six-axis gyroscope and accelerometer package, together with all the standard sensors.

The phone itself looks pretty amazing, having a full metal body with wavy patterns and LED edge lighting really make it look classy and stylish. It seems that Asus have decided to jump into the deep waters with this handset – it really looks amazing outside and inside, but it all depends on the price tag and the handsets that the rest of manufacturers will present.