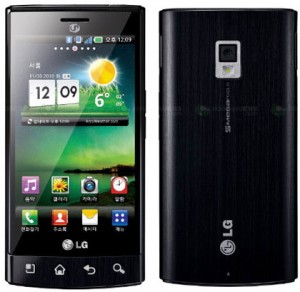 During the KES2010, which is the Korean equivalent to the Consumer Electronics Show, LG has announced their new handset for the Korean market only. “Another LG device – so what?” probably many of you are asking yourselves right now, but believe me – there is a reason for writing about LU-3000. This device is really fast, faster than iPhone and Samsung Galaxy S, based on a variety of tests of the three devices. So in fact, this turns out to be the fastest Android phone – something which is not common for LG.

The specifications of LU-3000 seem pretty good, although one could have expected a lot more from the “fastest Android handset”. The core of this mobile phone is TI OMAP 3630 processor running at 1GHz, supported by a 3.8-inch IPS TFT display with resolution of 480×800 pixels (it’s pretty good to see IPS panels in a handset, providing viewing angles of 178 degrees and accurate color representation), 5MP camera with autofocus and LED flash, capable of recording 1080p HD video, but LU-3000 is also capable of playing 1080p video either on the phone screen or on an external one, using the HDMI output. The version of Android is 2.2, but let’s hope that there will be Gingerbread for it.

It’s a pity that this lovely device will not be released to the rest of the world, but it’s possible that LG would make another device, similar to this one for us. If you are interested in the test between the iPhone, Galaxy S and LU-3000, take a look at the video bellow: