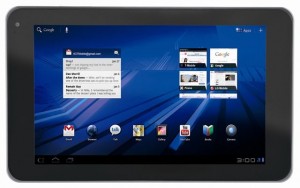 We’ve already seen LG G-Slate tablet at CES but hardly any additional information was available. In the past week there were numerous rumors, leaked videos and pictures about LG’s first tablet, but LG kept it all secret, neither confirming nor denying them, until now. The day when Google will present Android 3.0 Honeycomb is probably the best time to present this little piece of beauty. Probably the most interesting, unusual and exciting things about it – its ability to record and play 3D video. It seems like LG are on 3D wave, presenting the first 3D mobile phone for 14th February.

LG G-Slate will most likely be one of the first Android 3.0 Honeycomb tablets out on the market, as it is expected to be available starting from March this year. The tablet will also support (as already mentioned) playback and recording of 3D video, 4G connectivity, a 8.9-inch screen, support for 1080p HD video playback, one 5MP camera at the back with LED flash and a 2MP one in the front, a whole 32GB internal storage (pretty enough for a lot of music and pictures and some videos) and last but not least – the gaining popularity NVIDIA Tegra 2 processor.

Additional features like WiFi, HDMI, light and orientation sensors are also available. But unfortunately, one of the most important things was not announced by LG – the expected price of G-Slate. But with all those powerful tablets that are about to hit the markets in the upcoming several months, I’m pretty sure that the prices won’t be that much high.