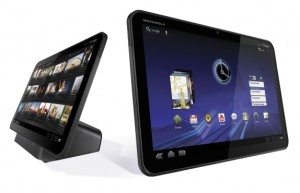 The hottest new tablet on the android scene is the new Motorola XOOM. It was announced on January 5th 2011 at CES 2011 with great anticipation due to it being the first android tablet to run the new Android 3.0 Honeycomb operating system. It actually won the Best In Show award at the event.

The XOOM was released in the USA on February 24th and Carphone Warehouse has announced that it will be available in the UK and Ireland on April 4th. Apparently Carphone Warehouse do have exclusivity on the device for a certain period of time when tied to a network.

A major downside to the XOOM in the states is its price… today PC World have announced that you can pre-order the Wi-Fi only version of the XOOM at a price of £449 GBP thats about €530 EUR, tempting isn’t it!