Samsung Galaxy Tab 10.1 to be Released Later this Summer 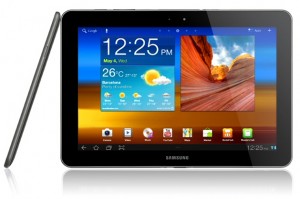 Samsung Galaxy Tab 10.1 the latest tablet from Samsung has already been released in the USA and was supposed to be released in Europe by the 22nd July 2011. Unfortunately yet again the release date of the Tab 10.1 has been delayed even further. Samsung have declined to give a definite future date only saying it will be released later this Summer…

For those who don’t know the new Samsung Galaxy Tab 10.1 is a hot competitor to Apple’s iPad 2, both in the 10 Inch screen range. The Tab runs version 3.1 of android, this version being specifically designed for tablets. There is an excellent review of the Galaxy Tab 10.1 over on Engadget.

If you are thinking of joining the world of tableteers you should really consider the Tab as an alternative to the iPad 2. The first being, due to Android of course is the huge range of customizations available on the Galaxy Tab compared to the iPad 2, all iPads are the same except the wallpapers which Apple amazingly do allow you to change!. Pro’s of the Tab over the iPad are more RAM, 1GB vs 500MB on the iPad.
Display is slightly bigger on the Tab 10.1 at 10.1 inches verses 9.7 inches, this means the resolutions is higher but the Pixels Per Inch (ppi) are greater on the Tab than the iPad, 149 on the Tab and 132 for the iPad.

I’m not even gonna start on the cameras on the iPad…. lets just say they are poor, both front and rear. The Samsung Galaxy 10.1 has a 2MP on the front and 3MP on the back. Stereo sound on the Tab only mono on the iPad. In all honesty I can not think of a reason to choose the iPad 2 over the Galaxy Tab, if you know of one, let me know!