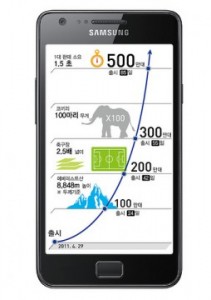 The Samsung Galaxy S 2 is faster and more efficient than its predecessor with a super 4.3” Amoled Touch screen. It operates on the latest android platform version of 2.3.3. The device features a 3.5mm audio jack with a large storage memory of 16 GB or 32 GB. It is loaded with a 1.2 GHz processor and 1 GB of RAM. The Galaxy S 2 features Wifi, Edge and HD quality 8 mega pixel cameras with geo tagging options and 1080p video recording options. It is added with Bluetooth version of 3.0 and a 2MP secondary camera. It is currently the thinnest smart phone on the market at only 9.9mm thick. It weighs on 119 grams. The device keeps getting automatic updates for Android and you can access thousands of Android apps available free in the market. It is all in all an excellent smart phone which is beautiful and powerful at the same time.

The Galaxy S 2 has acquired 56% of the mobile phone market share in Korea, and it’s the most popular mobile phone in 10 European countries. It is definitively one of the best phones on the market to date for features, style and power.

2 thoughts on “Samsung Galaxy S2 in a Huge Demand Now”