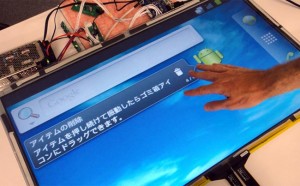 Large screen displays up to 10 inch with a touch sensor overlay are not new. Most operate on the widely accepted Windows platform. SKR, a company from South Korea is revolutionizing large screen multi touch display with the introduction of a 32 inch multi touch display that works off the Android platform, mimicking functions and operations that smart phone users are familiar with.

This 32 inch multi touch display is connected to an Android terminal through a USB for the touch sensors while display is through the usual HDMI port. This gives the best of both worlds: full high definition video allied to the functionality of the Android interface touch features.

SKR is active in digital signage and wanted to meet emerging needs of customers who wanted Android functionality in displays that Windows 7, at the moment, is not able to deliver. Since there were no vendors for this kind of interface, the company went on to develop one on their own, even developing the device driver. The response indicates the company made the right decision and is moving in the right direction with a head start.

This tangential application of Android, that is sweeping the smart phone world, to large screen displays means the signage industry will see radical new developments, enabling better user interface and interactivity.
Unfortunately there is no word on pricing just yet… but judging by this it wont be long until there is a dynamic android coffee table! Take a look at the video below for more info.