ANDROID 2.2.1 XXJPU ROM From Kalpik boosts up your Galaxy S 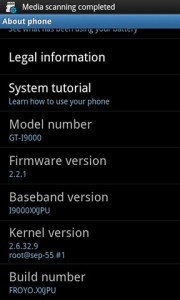 Are you among the people, who have received the long-waited Android 2.2 FroYo on your Galaxy S handset or you are still waiting it? But no matter if you have the FroYo or not, do you still experience some lag issues or you’re not satisfied with the speed of your device? If the answer to these questions is positive, then the new custom ROM from Kalpik from XDA-Developers might be the sweet candy for your Galaxy that you’ve wanted.

The new Android 2.2.1 XXJPU ROM really boosts up your Galaxy S phone with performance improvements in the following areas:

So if you are into installing custom ROMs and you would like to get the maximum speed and performance out of your Galaxy S, then download this ROM and give it a try. If you haven’t rooted your handset but you are willing to try something new, or are still running on Android 2.1 and would like to try the FroYo, dive in and install this custom ROM. But please remember, that this is a leaked and modified firmware update and Android Mobiles does not take responsibility for any damage to your device. If you are unsure how to root and install custom ROMs and what exactly you are doing, then it is better to wait for the official update from Samsung.