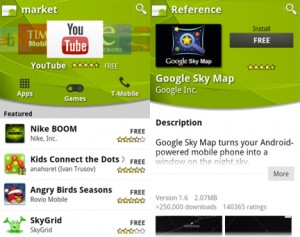 One of the things that users dislike most about Android is the Android Market. The almost lacking organization, the limited number of countries, from which application can be bought, the numerous applications that no one uses or that are on one and the same framework, just using different theme (for example a puzzle game by one and the same developer, split into tens of application about Disney characters, hot chicks, movie stars and so on) or some test applications, just showing “Hello World” on the screen, that some developers upload. All this lack of moderation or control really pisses off the users, but it seems that the things are changing.

First changes were some weeks ago, when Google has extended the list of countries, from which users can buy and sell their applications. Then the market itself was changed a bit, putting the comments in a separate tab, then adding a “Related” applications tab, together with the ability to automatically update an application when such exists.  But that’s not all. The Market is getting a new update these days with many new features (for some of which the developers were warned some weeks ago).

In addition, the user interface of the market is changed as well, adding more curves and stylish transition between promoted apps.