Invasion of the android tablets 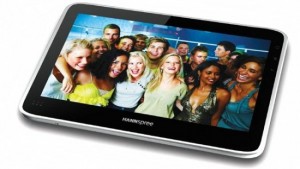 It seems that it’s a tablets’ day today. There’s plenty of news around about new Android-powered tablets which will be available sooner or later this year.

Let’s start with ViewSonic. Mostly they are known for their middle-class LCD monitors so we can expect a nice display in their tablet – ViewPad 7. To be honest, this is just a rebadged of the Indian OlivePad.  ViewPad 7 features a 7-inch WVGA touchscreen capacitive display, 3G support with ability to make phone calls via the tablet, 512MB RAM, WiFi, microSD slot for up to 32GB memory cards, GPS, front-facing camera with VGA resolution and a back-facing one with 3MP resolution. Another good thing about ViewPad 7 is that it is going to run on Android 2.2 Froyo. Everything looks fine until we take a look at the core of the tablet – a 600MHz Qualcomm MSM7227 processor, which is a bit out of date, and adding the price of about 530$ puts ViewPad 7 at the end of the top Android tablets. If you want to see ViewPad in real, visit the ViewSonic’s stand at IFA 2010.

Something more interesting comes from Nannspree and their first Android-based tablet. It features a 10.1-inch 1024 x 600 pixels display, Tegra 2 ARM A9 dual-core 1GHz processor, Flash 10.1, mini HDMI @ 1080p and USB ports, 16GB internal memory as well as WiFi and Bluetooth 2.1 connectivity. This niece piece of hardware will be controlled by Android 2.2 and the amazing 3500 mAh battery promises to keep you entertained up to 8 hours playing 1080p video. According to some rumors this tablet will be shown at IFA 2010. The expected price is about 507$.

Last but not least comes a 7-inch 3D tablet from the Korean manufacturer i-Station. It’s a natural thing to see a 3D tablet as there are 3D movies, TVs, notebooks and mobile phones. A drawback is that you have to wear special glasses in order to experience the 3D effect, however let’s take a look at the specs, though not much is yet known. Z3D will be running Android 2.1, having WiFi 802.11 b/g  and Bluetooth 2.0 connectivity, FM radio, internal storage of either 32GB or 64GB, ability to play 1080p video, an astonishing 5000mAh battery and as already said – a 7-inch 3D display. Z3D is expected to hit the markets in November for about 500$.