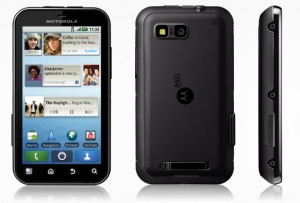 It seems that Android is a life-saver for Motorola. Since they’ve released their first Android-based mobile phones the brand got his name back among the leaders on the mobile market. So naturally Motorola continues its expansion with 2 new models, which were officially announced yesterday.

The first one is Milestone 2, which is the European version of Droid 2. The device has a 1GHz processor, which is a lot better than the 550MHz of Milestone, 8GB internal storage plus 8GB microSD card in the package, a 5MP camera capable of 720p HD video recording (something that Droid 2 doesn’t have) , WiFi tethering allowing you to use Milestone 2 as a WiFi hot spot for up to 5 devices. All this is powered by Motoblur’ed Android 2.2.  Milestone 2 is expected to hit the European markets in last quarter of the year but the pricing is not yet clear.

The other new member in Motorola’s family is Defy. One of the most interesting things about it is the display – it’s the gaining popularity 3.7-inch Gorilla Glass. Another interesting thing, which will certainly be liked by many people, is that Defy is dust, scratch and water resistant up to 1meter depth. So you don’t have to worry if you jump into the ocean with Defy in your pocket. Among the rest of hardware features one could find the 800MHz OMAP processor, 1.25GB onboard memory and a 5MP camera. The OS is Android 2.1 with Motoblur 1.5 on top of it. Like Milestone 2, Defy is expected to hit the shelves in the fourth quarter of the year.