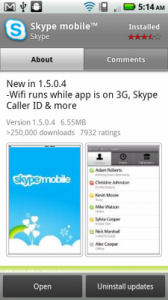 Yesterday Skype released an update of their Android application (which is still available exclusively only for Verizon users), stating in the description of the application:

So many of us thought that finally Skype for Android will use the WiFi connection for making skype calls, making them less laggy and not generating 3G traffic. Unfortunately this is not the case and is still a dream for most of us. If you try to launch Skype with 3G internet turned off, leaving the phone only on WiFi connection, you will have problems with your phone. Just several hours later the description of the application in the Android market was changed, stating that it is possible to have your WiFi turned on while using Skype, but the application itself will still use your data plan connection.

Except this, the updated version enables you to receive the incoming caller ID, ability to copy-paste in IMs, emoticons, you will see the country flag and name when making international calls and last but not least – you can update your status message with your current location.