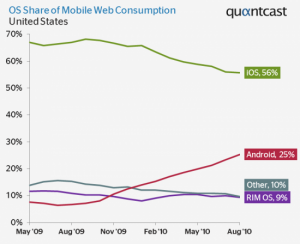 Since the release of Android OS, Apple and Google are constantly fighting, presenting different numbers of sold devices or number of updates to the new version of their OS or some other statistics. But no one can trust these numbers as they are not impartial. But now there are some numbers from the analytics firm Quantcast.  In the first graph we can see that Android’s share in the mobile web consumption has risen from 8% in August 2009 to 25% in August 2010. This is a growth of 17% just for one year. On the other hand Apple’s iOS is losing position and its share has dropped down to 56%. It’s twice more than Android but if the things go on like this, soon Google may reach or even outrun Apple.

The second graph shows the growth (or the loss in all cases except in Android’s one) for the month, quarter and year. It clearly shows how Android is getting more and more users even after the launch of iOS 4. Who will win the battle – Google or Apple – keep up reading us for more news and information on this topic, as Quantcast promises to release some more statistical information.