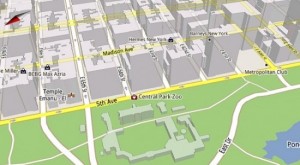 Some days ago Google presented their new mobile phone – Nexus S, and the new version of Android – 2.3 Gingerbread. At the same time, the technological giant presented a new version of Google Maps, but that was somehow neglected by most people as the noise was about Gingerbread and Nexus S. There are many changes and the most important and significant one is the lack of the annoying tiles.

Google Maps 5 offers a completely new approach in the way it represents the data to the end user. Instead of using the tile images, which caused sometimes a frustrating delay in loading and displaying them, Google has decided to use vectors. Everything is represented by vectors, thus the load time is almost equal to 0 and the user can browse around the maps quickly and easily. With the use of the vectors, some pretty good features have been added. Multitouch control is now present – rotate or tilt the map, sliding 2 fingers up and down the screen and the well-known 3D buildings will emerge from the flat image, giving you more clear image of the region.

Google Maps 5 was presented by Andy Rubin some days ago on a prototype tablet from Motorola and he said that we can expect Google Maps 5 in the market in a couple of days. So far so good, but here comes the bad news – the new version of Google Maps will be supported only by several mobile phones so far: