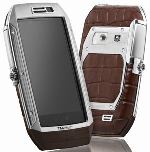 Technically, this model runs on Android 2.2 mobile. It is having 3.5” TFT screen which comes with regular android navigation buttons. A Link has 5.0 MP cameras with flash and it has stereo Bluetooth included in it. To add another communication feature, it has wi-fi capabilities. However, it disappoints when it comes to internal memory as it has only 256 MB internal memory. However, it supports 8 GB expanded memory. AS far as talk time goes, it supports six hours of talk time with about two weeks of standby time.
Here is the feature why it costs so much. That is its case. According to the kind of buyer, a mobile case can be made of different materials. It can have a case made up of 18k rose gold, steel or titanium mixed with diamonds just like Tag Heuer watches. As far as the screen glass goes, it is made up of Gorilla glass which is used in most of the higher end smart phones.