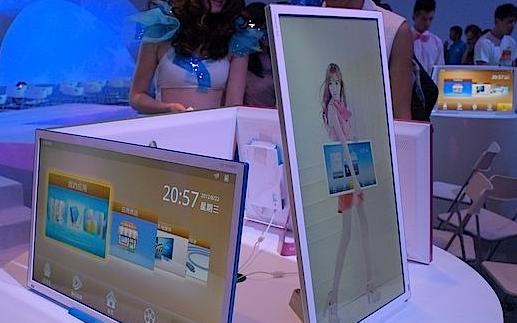 Ok I have to admit I’m in a bit of a muddle over the latest offering from the combined efforts of Tencent and TCL Multimedia…. A 26 Inch portable TV running Android. Yes I did type  and you did read “portable”. Who would have ever thought a 26 inch device would be categorized as portable! Either way I think I want one….?

It has a 1366 x 768 display with a dual core Cortex 1 GHz processor. Bung in a Mali 400 GPU, 4GB of RAM and Version 2.2 of Android and you have a TV (not a tablet, as the screen is not touch sensitive) capable of surfing the web, listening to music, watching videos and playing games. You control the 26 inch beast with a infrared remote control and keyboard. For connectivity you have the standard options including Wi-Fi, USB ports HDMI port and 3.5mm headphone jack.

The iCE SCREEN looks like a cool piece of kit, as for it being portable, I’m not too sure (and I do like my big phones!) Maybe if it was actually touchscreen it may have a chance! Also from reports I read it looks like it has an external battery…? plus it doesn’t have a tv tuner so is it actually a TV? This post is asking more questions than it answering!